Welton Rovers archived promotion back to the Toolstation Premier League with a gutsy, determined team effort that saw Welton stalwart, Joe Garland, score the only goal in a tight match that sent the large numbers of the travelling Green Army back with a huge smile on their faces for a job well done. 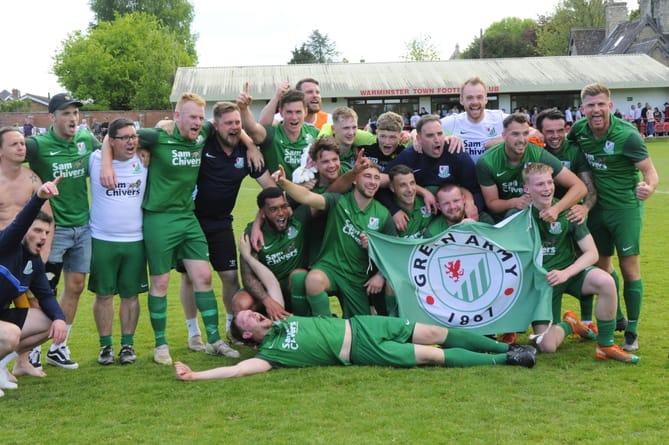 This was always going to be a special match, and so it turned out to be, with nearly 700 spectators cramming into the ground before kick-off. Once the game had settled down, Welton started probing their hosts defence with Courtney Charles beating his marker to set up Toby Cole whose first time effort was cleared by the Warminster defence.

A corner on the left for Warminster was met by fullback Lewis Graham but he could only guide his header straight into the safe arms of Alfie Kelsey. Another flowing Welton attack saw Lewis Russell and Cole mesmerise the defence before setting of Charles but he fired wide.

Welton were reduced to ten men when Allen was sin binned for ten minutes for something he said to the referee and a free-kick by Eben Mortimer-Taylor from the edge of the box was dealt with by Kelsey. Just before the halftime whistle, a stunning strike from Martin Johnson had goal written all over it until Welton defender, Archie Morris in the right place at the right time launched a brilliant diving header to intercept the ball and save the day for Welton.

It was a very tight start to the second half with both sides probing but not wanting to make mistakes. A free-kick from Jaiden Savery flew into the box where it was met by Garland who headed it into the mix and after an almighty scramble the ball was cleared. The hosts responded with a long range shot from Conner McKay that was saved by Kelsey who cleared his lines with a huge kick that saw the ball fall to Cole on a charge. His shot was saved by Sam Thomson in the hosts goal, only for the ball to fall back to Cole who struck a cracking first time effort in reply, only to see Thomson tip the ball over the bar to deny Welton an opening goal. Jed Parfitt then entered the fray for Welton replacing Allen.

The vital breakthrough came in the sixty fifth minute when another Welton attack had the Warminster defence on the back foot and the ball fell to central defender Garland on the left of the area, unmarked and he calmly slotted the ball into the corner of the net to see the Green Army erupt, what a goal.

A 30-year screamer from Lewis Hunt was well saved by Thomson and Hunt was then replaced by Ben Wych, shortly after Russell was replaced by Jacob Watson for fresh legs. Welton were holding firm and there was five minutes added time at the end. When the referee blew the final whistle there were scenes of utter joy and jubilation amongst the players and supporters of Welton for a job well done that will live long in the memory.

Many congratulations to all the players, officials and supporters of Welton Rovers, Premier League here we come. Bob Allard