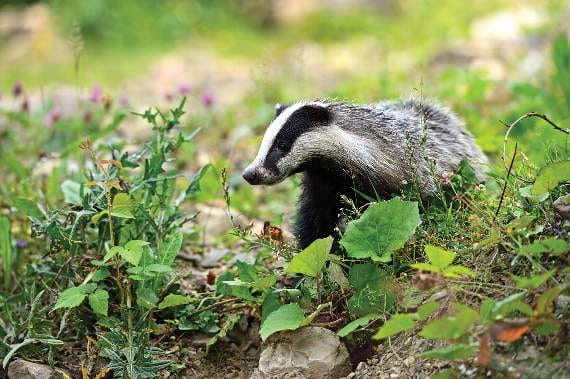 Badgers will be safe from culling on Council-owned land for now, with areas offered up for vaccination programmes instead. Photo: Kylsynskyy

In a close 25–22 vote, the Labour group in Bath and North East Somerset has won a controversial motion to refuse badger culling on Council-owned land in the area; instead, offering up land for a vaccination programme against bovine tuberculosis (bTB).

The motion comes after Natural England received an application for badger culling in Avon, with trials already having been carried out in parts of West Somerset and West Gloucestershire, beginning with two pilot trials in October 2013 in these areas. Badgers are one of the most legally protected animals in the country, and culling can only take place under licence.

At the meeting, Deputy Leader of B&NES Labour Group, Councillor Joe Rayment, argued that only 5.7% of incidences of bTB are caused by badgers, and that millions of pounds are spent each year on the badger cull, including policing; arguing that each badger culled costs the Government, and the taxpayer, thousands of pounds.

Instead, the motion asked that vaccination should be the way forward, with culling arguably seven times more expensive per badger than the vaccination scheme being carried out currently by the Welsh Government.

Norton Down look up

A great time to join U3A for a pinch of coffee

Labour also argued the case on grounds of cruelty; stating reports that nearly 23% of badgers culled take more than five minutes to die, making the method inhumane by Government standards.

The now voted-through motion also states that the Council believes the cull has been ineffective, citing testing, movement control and vaccination as better ways forward for controlling bTB. It also calls upon the Government to revisit the evidence on badger culling and end the programme – arguing that public money could be better spent than on an estimated £100 million badger cull by 2020.

Because of the vote result, the Council will now refuse permission for any badger culling to take place on B&NES-owned land and will be writing to Parish Councils to encourage the implementation of the same policy. It will also now write to the Secretary of State for Environment, Food and Rural Affairs to offer access to Council land, but only for a coordinated badger vaccination programme.

Cllr Joe Rayment, (Labour, Twerton) said: “I am thrilled that this motion passed and that no badger culling will take place on any Council controlled land.  This sends a very clear message to Environment Secretary, Michael Gove, that he should look again at the evidence and see that the facts do not support badger culling as an effective means of controlling bovine TB.  Instead of culling on B&NES land, we have offered use of the land for badger vaccination which is far cheaper, far more effective and far less cruel. I hope the Government will take up our offer.”

B&NES Council now joins a small but growing group of local authorities who are refusing culling on their land. Back in June 2015, the National Trust said it would not be allowing culls on their land until the results of all four years of pilot trials were known – it is one of the largest landowners in the UK.

The argument for and against badger control is a fierce one, with the NFU and Defra putting forward a case for necessary culling – farmers can lose thousands of pounds and lose entire herds of cattle to the disease; even if only one animal is tested positive. Millions have been spent on trying to eradicate it and in providing research. The most recent Brunton paper showed badger culling to have had a positive impact on driving down Btb in cattle, yet the culling programme has been criticised for a lack of statistics or tested animals. Whilst Btb can also be found in other animals such as deer and cats, badgers roaming wide areas and marking territories have been blamed for the spread of the disease, which can be passed to humans.

Whilst culling has been labelled by some as a ’monstrous waste of time and money’, a vaccination scheme is not cheap either, with costs estimated by the Government of around £2,250 per square kilometre per annum.